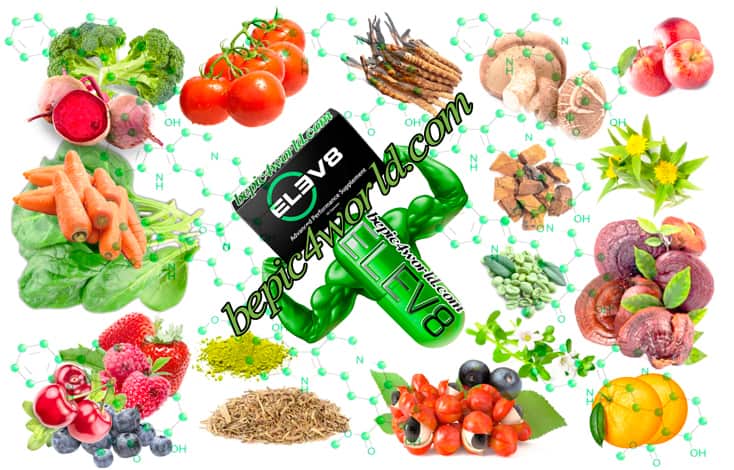 Ingredients of the Elev8 capsules

There are three main groups of the natural vegetable components in the capsules Elev8. The natural adaptogens, natural components for the energy and brain and extracts of vegetables and fruit. The substance adaptogens capable to strengthen the resilience of organism to the harmful influences of external factors and to transfer the exercise stresses easier. All adaptogens have the strong fortifying and neuroregulatory action. Adaptogens promote to the activization of the metabolic processes and rising to the level of the internal energy of the organism.

The following adaptogens are the part of Elev8

>Rhodiola Rosea Extract contained in the capsules Elev8 is the adaptogen recognized by the science. The rhizomes of the Rhodiola Rosea contain at least 150 micronutrients phenolums, mono and polysaccharides, terpenoida, flavonoids, anti-quinones, aethers, vitamins and trace substances. In scientific medicine, it is applied at the asthenic and neurasthenic conditions, increased fatigue and the reduced working capacity. The Rhodiola Rosea Extract is used in diseases of a nervous system, for the reduction of the rehabilitation period after the difficult illnesses and operations. It regulates the blood sugar levels. Antiaging adaptogen Rhodiola rosea speeds up brain function, reduces fatigue, improves mood and increases physical stamina.

>Cordyceps Extract is contained in the pills Elev8. This mushroom has a long story of use in traditional Chinese medicine. Today the clinical and scientific research continues doing the new scientific discoveries. But in practice, the people have a set of positive improvements. Cordyceps mushroom contains a full spectrum of natural active compounds for optimal health and a variety of unique bioactive nutrients. The сordyceps extract can help replenish the lack of natural energy and help restore the body’s internal strength.

>Reishi Mushroom Extract contained in the capsules Elev8 is the mushroom growing on trees. Throughout centuries, it was used in traditional Chinese medicine. It contains a huge list of 400 micronutrients of triterpenoid, polysaccharides, peptides, alkaloids, amino acids, trace substances. Reishi Mushroom possesses the wide list of clinically confirmed curative effects. These are antitumoral, immunoregulatory, antioxidants, hepatoprotective, hypoglycemic, antibacterial and antiviral effects. Reishi Mushroom fights with free radicals. Reduces the level of cholesterol in the blood.

>Shiitake Mushroom contained in the capsules Elev8 is belong to the group of the herbal adaptogens. Shiitake Mushroom exerts the impact on the organism. Not so long ago, the potent antioxidant of L-ergotionein was found in these mushrooms. There is a series of research of the Japanese scientists demonstrating the big advantage of Shitake Mushroom at the diabetes mellitus.

>Chaga Extract contained in the capsules Elev8 is a black birch mushroom. Chaga is the tree formation on a birch. It reduces the blood sugar level, improvements the health and decreases the pains at malignant tumors. Stomach ulcer, gastritis and also as an antioxidant. Chaga Extract helps the stomach ulcer, gastritis. It is used also as an antioxidant. The numerous pigments which are its parts are considered as the main biologically active elements of Chaga.

>Bacopa Monnieri contained in the pills Elev8 is the grassy plant of the family of plantain. It is applied as an herb for several millennia. Enhances the cerebral activity, improves the memory and ability to knowledge. A series of the scientific research indicates the efficiency of Bacopa Monnieri at the prophylaxis of Alzheimer’s disease. The chemical composition of the plant of Bacopa Monnieri is extremely various. The plant contains such biologically active micronutrients as alkaloids, flavonoids and the vegetable alcohols.

Ingredients of Green Coffee Bean extract and Guarana Seed Extract will fill you with energy, increase your mental capacity. Increase the level of energy, improve attention, clarity of thoughts and your productivity with the wonderful natural components contained in the pills Elev8 – Guarana Seed Extract and Green Coffee Bean Extract. When your mind clears and the body becomes energized, you will feel younger and stronger. Chlorogenic acid is received from the seeds of green coffee. It really reduces the risk of developing the cardiovascular diseases. Chlorogenic acid lowers the cholesterol level, has the hepatoprotective, antioxidatic and antitumoral effects.

>Guarana Seed Extract contained in the capsules Elev8 is the liana plant growing in the South America. Guarana was used for a long time by Indians for simplification of the distant pedestrian transitions. Besides, it was applied against migraines, feverish states, bacteriemic infections. Today the Guarana Seed Extract is popular as a tonic and fortifying agent. Modern research has shown that the reception of Guarana positively influences to the memory, increases the cognitive abilities and improves memory.

>Yerba Mate Extract contained in the capsules Elev8 is the tree growing in the South America. The dried-up leaves of a tree are used for the preparation of mate tea. The leaves of the tea tree have a very rich chemical composition and contain a series of the organic acids. Also leaves of a tea tree contain B8 vitamin, caffeine, flavonoids, Tanninums, alkaloids, Theophyllinum, Theobrominum, a chlorophyll, B2, B3, B5, B6 vitamins and micronutrients. The scientific research showed that the leaves of the Paraguayan tea tree help to people who are struggling with an allergy, reduce risk of the diabetes mellitus, participate in the regulation of the appetite, improve the cerebral activity and ability to concentration of attention. Leaves increase the density of the bone tissue (for women) in a menopause and promote a deep healthy sleep.

>Yohimbine contained in the capsules Elev8 is an alkaloid derived from the tree of yohimba growing in the Central Africa. It is useful for the erectile dysfunction. Strengthens the male potency. Yohimbine increases the physical activity, prevents dehydration of the body. Yohimbine is used in the treatment of hypertension. Vitamin B3 is involved in the metabolism of proteins, fats and carbohydrates, protects against free radicals, prevents the senile dementia.

>L-Theanine is the natural amino acid. L-theanine exerts the direct impact on the brain activity, reduces the level of the stress and has the properties of the antidepressant. L-theanine is the relaxing substance which at the same time doesn’t cause the feeling of the sleepiness. In the combination with caffeine stimulates thought processes and focuses attention. L-Theanine helps to maintain the level of energy balance, enhances mental concentration and enhances cognitive abilities.

>The extracts of the following vegetables and fruit are the part of Elev8. Spinach, broccoli, beet, carrot, tomato, orange, apple, strawberry, cherry, blueberry, cranberry. The extract of the black pepper is rich in vitamin K, iron, manganese, is a part of Elev8. It improves the intake of many valuable nutrients – Beta carotinum, selenium, vitamin B12.

The cover of the capsules is the additional useful component for the body. The cover of pills Elev8 is made of the natural plant material the brown and red algae which named agar-agar. Therefore, it contains a lot of iodine, gland, calcium and magnesium. It perfectly stimulates the intestine walls.

The main conclusions about capsules of Elev8

Conclusion about the structure of capsules (pills) Elev8. All ingredients Elev8 pills (capsules) by BEpic are of exclusively natural origin and pure extracts of herbs, vegetables, fruits and mushrooms. Elev8 is the unique and revolutionary product. All the components Elev8 capsules (pills) are known to people for thousands of years. The combination of components was selected by the developers extremely well and correctly, and this is confirmed by positive results of their practical application. 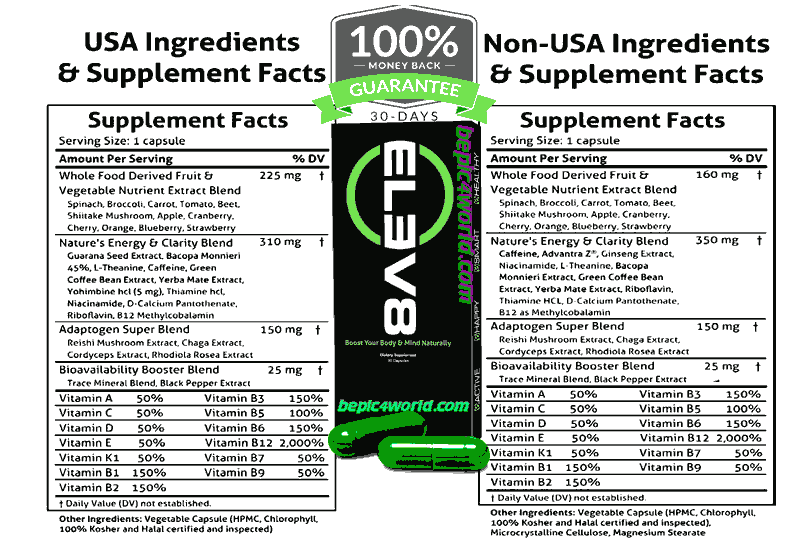 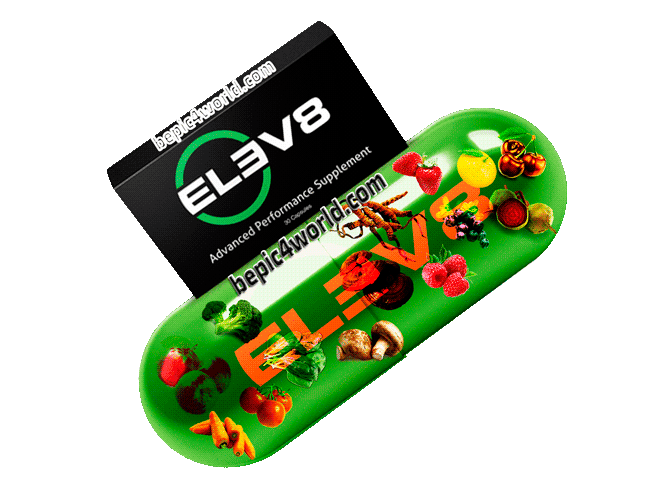