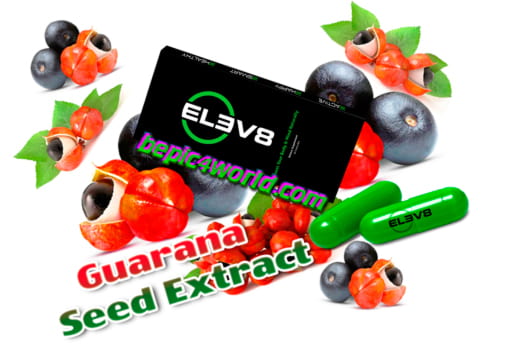 Guarana Seed Extract is a part of the B-Epic product in Elev8 green capsules (pills). The Guarana plant is a green shrub with orange-red fruits. Guarana is a natural, healthy ingredient in Elev8 capsules (pills) which in the wild grow in subtropical South American countries: Peru, Brazil, Paraguay and Colombia. Guarana refers to a species of the creeping plant family. Only after several years of shrub life in the winter months in January and February, fruits appear in the Guarana bushes.

Already closer to the fifth year of life, the shrub gives a full crop of about 4-5 pounds of fruits from which later receive valuable Guarana Seed Extract. The fruits of the shrub of red-orange color contain seeds resembling a small grape in size. From the seeds of this plant, natural Guarana Seed Extract is obtained, which is used for the production of natural medicinal preparations and is also used as a healthy tonic energetic nutritional supplement. The botanical description of the Guarana plant its properties and capabilities has been known to people for several centuries. But only at the beginning of the 20th century the Guarana plant began to be more widely used by people to prepare the first healthy tonic energy drinks.

The subtropical countries have filled the plant with useful components. The main benefits of Guarana are concentrated in the natural composition of the substances and compounds of this plant. The composition of Guarana Seed Extract contains tannins, vitamins and trace elements: sodium, zinc, manganese, Vitamins A, Vitamins B, Vitamins E, vitamin PP. Guarana contains theobromine and caffeine compounds, saponin and catechin compounds with strong antioxidant effects.

About health and body benefits

The antioxidant properties of Guarana are beneficial in that they neutralize free radicals. Free radicals are harmful molecules that, when interacting with cells, can cause damage in the future, causing cancer, aging and diseases of the cardiovascular system. Thanks a scientific laboratory experiments, it is known that Guarana, due to its antioxidant capabilities, can be used to prevent cardiovascular and cancer diseases. Experiments have shown that guarana slows down the aging process of skin cells.

For memory and attention

Guarana, a part of the B-Epic cell product, has a lot of natural caffeine. The concentration of caffeine in Guarana seeds exceeds the amount of caffeine in coffee beans by 4-5 times. Caffeine can reduce fatigue by blocking the effect of adenosine. Caffeine reduces drowsiness and preserves mental concentration and energy. No wonder manufacturers use Guarana to create energy drinks. Guarana helps improve memory capabilities and learning ability. Guarana can also help improve mood and reduce stress. Guarana, like ginseng, refers to substances that stimulate brain activity well. The use of Guarana contributes to an increase in concentration and memory and the elimination of depression.

For weight loss and cleansing

Thanks to its ability to increase metabolism, Guarana can accelerate metabolic processes and thereby increase the burning of excess calories that are unhealthy, activating the mechanisms of healthy weight loss. Guarana reduces hunger. Studies have shown that guarana can block the genes that are responsible for fat cell production. It is also known that this plant can promote genes that slow down fat cell production.

After a great physical exertion, Guarana increases the working capacity and endurance of the body and uses internal fat reserves of the body’s cells as the main source of energy. Guarana, due to its composition, helps to eliminate harmful toxins from the body. Guarana affects lowering blood cholesterol. The plant has excellent tonic and restorative properties of the body thanks to the tannins, vegetable antioxidants. Guarana has been used for many years to treat digestive problems and to help with constipation and diarrhea. Caffeine in Guarana promotes good bowel function.

>How to buy B-Epic products